RULES OF THE BOARD!

Go to the 'Who made it onto THE BOARD This month'? page to see who had been invited so far. 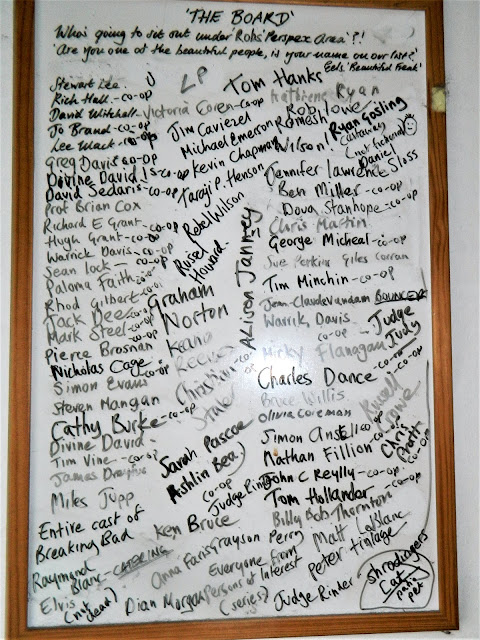 Sadly David Bowie and Alan Rickman had to be rubbed off.
It's in the rules, no dead people. Sadly our beloved George Micheal has also now departed.
Except Elvis because quite a few people insist that he is still alive (pretty old by now though!)

This is The Kitschin board. Established at the turn of this century by Lu and brother Jules. It has been the subject of much debate over many years. Who is invited to the ever imminent Party in Lu's kitchen?!
Update: The 'Patio Party' is now called the 'Perspex Area Party'. This is because Lu and her Kitchen have moved location. Now there is a different area for the party and a perspex cover has been incorporated.
Many celebrities have been marked on the board only to be erased again, the above photograph is of board mark twenty something ( probably, we are beginning to lose count). The idea of the board was born, as all the best ideas are, one cheery night in a local pub. After many hours devoted to a great deal of thought as to which well known public figures we would want to invite to our exclusive patio party we decided to write down our final short list, lest we forget. Many of those who made the original board have since found themselves removed after somehow diminishing their shiny starry status in our ever swaying opinions on who is, or isn't, just quite interesting or amusing enough to really make it to the big night. We don't actually know when that big night will be as yet, but one thing's for sure, as the years tumble by, it is certainly going to be sometime soon.
The board explained:-
The heading for the board,
'Are you one of the beautiful people, is your name on our list?'
This is a line from one of the songs of my all time favourite band 'The Eels'.  It has to be said, if you are not that fond of the soulful tunes of the moody Mr E of 'Eels', then you may well not wish to spend a great deal or time hanging out at Lu's Kitschin as the sounds of E & Co have rung out load and clear in the kitschin, for many a year now ).
We then have an unspoken top ten, but we know who they are, mainly because they are the first top ten on the board. After that, it's fairly random. If they are on the board then they are pretty brilliant because we will all have argued for hours about their suitability to attend our great event.
This is a relatively new board and these days we seem to be getting more intolerant and picky about who comes, and the list of guests seems to be rapidly shrinking.
Nominations are subject the rules of The Board and these rules
are:-

RULES OF THE BOARD
If nominating then you have to nominate someone whom you have seen interviewed. The reason for this rule is that we feel you get a far better insight into the celebs true personality once you have witnessed them on a television interview where they will have been subjected to a series of annoying and predictably crass questions. If they can handle these well and with humour (despite what must be an underlying desire to throw a well planted punch at the host), then we can only see that as commendable. Some people surprise and some disappoint. It's all down to getting to the truth behind the veneer.

No one is allowed to receive an invite on looks alone. It's all very well to wish that Leonardo, or the likes, might turn up at the door, but would he actually turn out to be a crashing boor? That's the big question.
Is he just going to keep crapping on about climate change?

No Politician allowed. We are not allowed to invite any politicians or overtly politically opinionated people as they are just going to be a boor and the evening isn't about talking politics.

No Religion. Religion is a total no go area on any higher or lower level.

No Dead people. The rule that no one who is dead is allowed to come is self explanatory, it's an obvious problem. There is only one exception to this rule and that is the allowance of Elvis, who, as we all know, according to rumour,  may not actually be dead after all. Some people insist that they have seen him. Surely he must be getting on a bit now though,  if he really isn't.dead. Though, if he is getting on a bit, that's not a problem, we are not ageist here in The Kitchen and we do not dictate and age limits to the guest list.

No Cartoon or Fictional characters. We cannot have cartoon or fictional characters for the simple fact that they do not actually exist.
Although there are a few exceptions also to this rule-
Darth Vader is to be the bouncer and we will of course be inviting the actor who played him in Star Wars to don his black cape and mask once more and take up his most famous role.
Mrs Doyle and Father Ted can come because, fictional or not, they are all too real to us, so that's the end of that debate. Mrs Doyle will be in charge of the tea for those who can't take anything stronger.

We will be having someone in charge of catering although, as yet, we seem  to have trouble coming to any final agreement on exactly who. We do love Michele Roux Jr, but some find his food a little too fussy, so we are now thinking more along the lines of asking Raymond Blanc in to take care of all this.

What some things mean on the board-

Co-op. This is written next to any guest we feel would be willing to nip up the road to our local Co-op and buy another bottle of wine should we find ourselves running low on liquid refreshment.
The co-op next to a name will go greatly in the nominated guests favour should the debate start to drift towards who should now be removed from the board.

That's about it really.
So, should anyone reading this blog decide that they wish to contribute to 'The Board' then feel free, we would greatly appreciate some wider input, but I warn, you,  many have sat in the kitchen and never found a single one of their nominations make the board. It's a strict  and unforgiving list.
Views on those already nominated are also welcome.

Anyone who can secure three new names on The Board will receive a special V.I.P invite to the big night in the small kitchen.